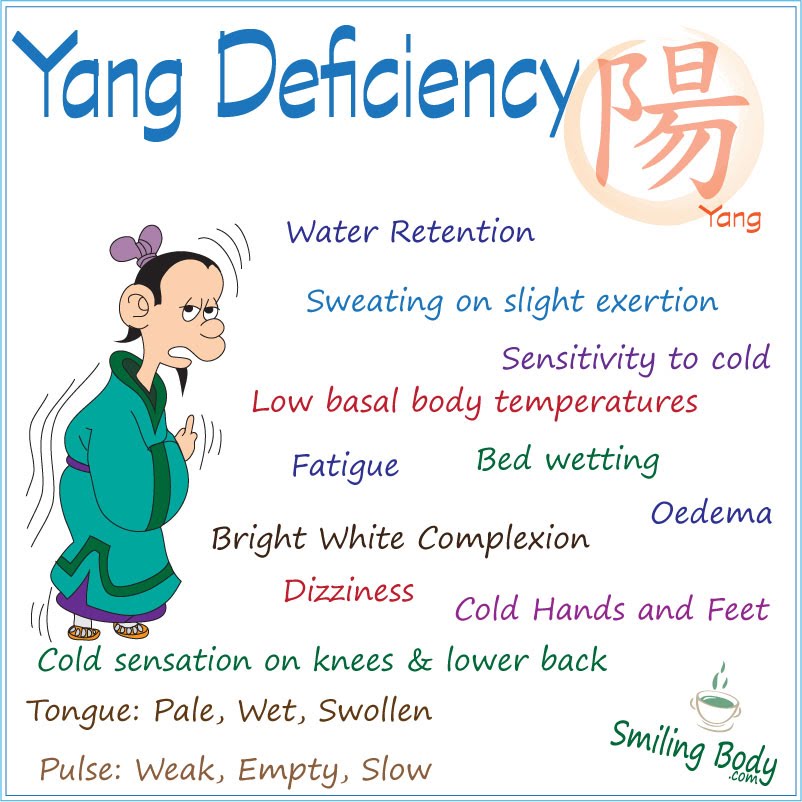 You may suffer one of more of the above. If in doubt see a practitioner.

Ancient Chinese people were greatly interested in the relationships and patterns that occurred in nature. Instead of studying situations and things in isolation, they viewed the world as a harmonious and holistic entity. In their eyes, no single being or form could exist unless it was seen in relation to its surrounding environment. By simplifying these relationships, they tried to explain complicated phenomena in the universe.

Yang is the energy that is responsible for warming and activating bodily functions. When Yang is in decline or deficient you feel cold and your body begins to slow down, displaying signs of under activity. There are a number of simple methods to tonify Yang.

Foods that benefit Yang, with the greatest tonics in bold:

Foods to avoid. If you are experiencing Yang deficiency then it is important to avoid foods that will further deplete your body’s Yang energy. Cold food and liquids fall into this category. Here ‘cold foods’ refers not only to those directly taken from the fridge but also to raw foods, as these require extra energy for digestion compared to pre-cooked foods. This may mean choosing a pasta salad over a green salad or switching from muesli to oat porridge for breakfast.

It is important to remember that we can change the “nature” of food to warming foods by cooking or warming them. This will preserve their energetic and nutrient value, while increasing their Yang nature, therefore soups, porridge and slow roasted foods show become the dishes of choice for those with a Yang deficiency. The herbs and spices mentioned above are warming and as such in small amounts encourage digestion and circulation throughout the body. While it may seem reasonable to achieve an improved warming effect by using the stronger spices such as black pepper liberally, care needs to be taken as these can be used to excess, inducing sweating which in fact actually has a cooling drying effect on the body.

In general, herbs that tonify Yang are warm and dry in nature.  They can injure Yin and give rise to fire, so they are contraindicated for a person with deficient Yin and excessive fire syndrome.

Incomplete – Come back for more later………..

James O’Sullivan - that's me, a people friendly practitioner and lecturer of Integrated Medicine, serving my patients, my students and the public with the positive benefits of both Conventional Western Medicine and Traditional Chinese Medicine. It's a wonderful life Disclaimer: This article is not intended to diagnose or assess. The information provided is not to be considered a substitute for consultation with a qualified health care practitioner.
Please share! Help the word get out. Pin the graphic too.
Categories: TCM, Yang Deficiency, Yin Yang