This not so tasty beverage has a long history of household benefits including pickling produce, weed killer, cleaning coffee makers, polishing armour, and dressing salads. It’s also a traditional health remedy, found to treat everything from a salad dressing to skin disorders to sunburn to boost energy.

Today it is easily available in the various health food stores that dot our landscape. Here are some of the benefits of this versatile natural liquid.

The effect of vinegar on blood sugar levels is perhaps the best researched and the most promising of apple cider vinegar’s possible health benefits. Several studies have found that vinegar may help lower glucose levels. For instance, a 2007 study of 11 people with type 2 diabetes found that taking two tablespoons of apple cider vinegar before bed lowered glucose levels in the morning by 4%-6%.

A 2006 study showed evidence that vinegar could lower cholesterol. However, the study was done in rats, so it’s too early to know how it might work in people.

Another study in rats found that vinegar could lower high blood pressure. A large observational study also found that people who ate oil and vinegar dressing on salads five to six times a week had lower rates of heart disease than people who didn’t. However, it’s far from clear that the vinegar was the reason.

A few laboratory studies have found that vinegar may be able to kill cancer cells or slow their growth. Observational studies of people have been confusing. One found that eating vinegar was associated with a decreased risk of esophageal cancer. Another associated it with an increased risk of bladder cancer.

If you are attempting the ideal health weight, add 2 teaspoons of apple cider vinegar to 500 ml (16 ounces) of water. This concoction can be sipped throughout the day. Research shows some limited, yet significant, weight loss benefits from sustained daily intake of acetic acid (which is a main ingredient in Apple Cider Vinegar).

In a 2009 study published in Bioscience, Biotechnology, and Biochemistry, it was found that subjects that consumed acetic acid for 12 weeks experienced significant declines in body weight, abdominal fat, waist circumference and triglycerides. Triglycerides contribute to the bad cholesterol that we want to avoid.

The body constantly strives to achieve a state of equilibrium. Apple cider vinegar helps the body maintain a healthy alkaline pH level. Research shows that higher acid levels (lower pH level) leads to a lack of energy and higher incidences of infection. Hence, my desire to sip some a few times a day for a natural boost of energy.

As part of balancing the body’s pH, apple cider vinegar creates an overall detoxification of the body. Research shows that it can help stimulate cardiovascular circulation and help detoxify the liver.

Apple Cider Vinegar helps to break up mucous throughout the body and cleanse the lymph nodes. Believe it or not, research suggests that apple cider vinegar can help with allergies because of its ability to reduce mucous and sinus congestion. When reducing the effects of allergies, it can also help stave off sinus infections and their related symptoms, such as sore throats and headaches.

This vinegar is rich in natural enzymes that can help rid your body of candida—yeasts that are attributed to thrush in humans. Candida also is blamed for creating symptoms of fatigue, poor memory, sugar cravings, and yeast infections.

Rinsing your hair after shampooing with Apple Cider Vinegar will boost your hair’s body and shine. A practical and safe recipe would be to use an old well washed shampoo bottle and fill it with 1/2 a tablespoon of Apple Cider Vinegar and a cup of cold water. Pour the solution through your hair after shampooing several times a week for impressive results. NB. try a little on your hair first to rule out any sensitivities you may have.

Dilute Apple Cider Vinegar with two parts water, and spread the brew over your face with a cotton ball to replace your current toner. You can do this at night after washing, and in the morning before you apply your moisturiser. A dab of Apple Cider Vinegar can also be left on the skin overnight to fade age spots or acne scars.

You can also use it on warts. Soak a cotton ball in apple cider vinegar, then fasten the cotton ball over the wart with a plaster overnight. The skin may swell some as it reacts with the solution. However, the wart will fall off. Once it falls off, the treatment should be continued for a few more days, to make sure the wart doesn’t return.

Add a cup of Apple Cider Vinegar to your bath, and soak for 10 minutes to eliminate discomfort from sunburn.

Fill a bottle with equal parts apple cider vinegar and water, and shake before applying to the face.

One part vinegar and one part water can be sprayed on your pets fur and rubbed in generously to the skin. Saturate the entire coat, and continue every day for a few days to a week. Any flea infestation will surely be gone.

Apple cider vinegar will clean your toilets and leave your bathroom smelling like apples! Just pour apple cider vinegar into the toilet, and allow it to sit overnight. It can also be used in dishwashers as a substitute for dish detergent. Mix 1/2 cup of apple cider vinegar with 1 cup water, and you can use this solution to clean microwaves, kitchen surfaces, windows, glasses and mirrors, too.

As you can see, apple cider vinegar is a miracle product that cab be used in a multitude of ways. I highly recommend its use!

Apple cider vinegar could theoretically interact with diuretics, laxatives, and medicines for diabetes and heart disease.

If you have diabetes, check with your health care provider before using apple cider vinegar. Vinegar contains chromium, which can alter your insulin levels.

Please share! Help the word get out. Pin the graphic too.
Categories: Beauty, Cleanse, Liver, Skin 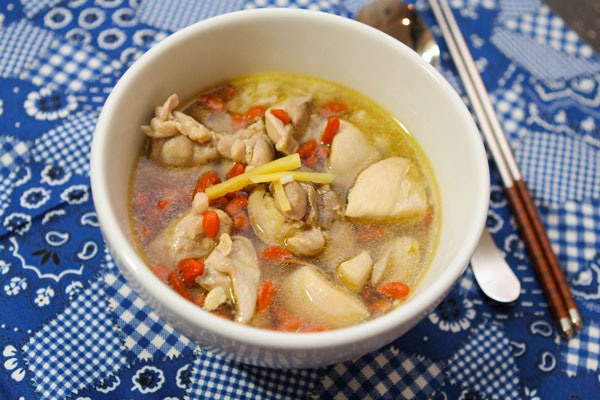 A hearty healing dish that strengthens weakness due to Illness or Surgery. I recommend that the ingredients below should be fresh and organic is possible. “When you buy products from organic farmers your purchase is like a donation to a healthier world!”.

Actions/Indications/Functions. This dish Warms the Stomach, while Tonifies Qi. It Nourishes Blood. A wonderfully nourishing dish that Strengthens Liver and Kidneys

Sweet potato, wheatgrass and wild garlic, all have anti-inflammatory and cleansing properties, so this is the perfect soup if you are feeling the cold or your immune system is sluggish after any winter bugs or illnesses.

Wild garlic is only available in the Spring, so if you want to make this soup at other times of the year, why not substitute it with a mixture of wild rockers and spinach.
You can also freeze this soup for later too!

Heat the sunflower oil in a medium saucepan over a low heat, add the shallots and a teaspoon of water and allow shallots to soften. Add the diced sweet potato and sauté for 5 minutes. Pour in the hot vegetable stock. Bring to the boil and simmer for about 15 minutes until the sweet potato softens.

Meanwhile mix the wheatgrass juice or powder and the creme fraiche or natural yogurt together in a small bowl.
Remove the pan from heat. Pour mixture into a blender or food processor and blitz until smooth. Add the wild garlic leaves and blitz again until smooth. Season to taste. Pour into bowls and swirl one tablespoon of the creme fraiche or yogurt into each portion and serve.

This is an excellent soup to benefit the Chinese Liver (Gan)

Please share! Help the word get out. Pin the graphic too.
Categories: Blood, Liver, Qi Deficiency 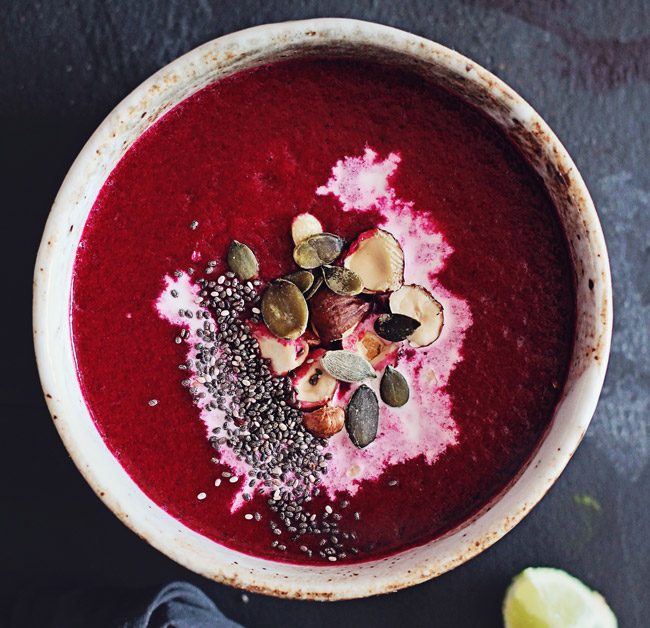 Beetroot is nutritious and is loaded with energy and cleansing properties. Its rich in potassium, silica, iron, amino acids and vitamins A, vitamin B and vitamin C.

This soup takes just 45 Minutes to prepare and cook, giving you a delicious nutritious meal in a bowl, energises your detox system. A powerhouse!

Place the unpeeled beet roots in a pot, cover with water, bring to boil then simmer for 30 minutes until tender.

Drain from water and set aside to cool.

Heat the coconut oil in a cast iron skillet, add the onions, garlic, leek, and carrot and cook for 5-7 minutes over low heat. Remove from the heat and transfer onto a plate.

Peel the beet roots, cut into cubes, and add into the blender, together with the cooked vegetables and warm vegetable broth.

Process to obtain a smooth cream.

Season with salt and serve garnished with mixed seeds.

Beetroot is an ideal blood tonic for Blood Deficiency and is traditionally used in debilitating diseases and convalescence. Beef stock provides vital amino acids and nutrients for strengthening muscles and bones. 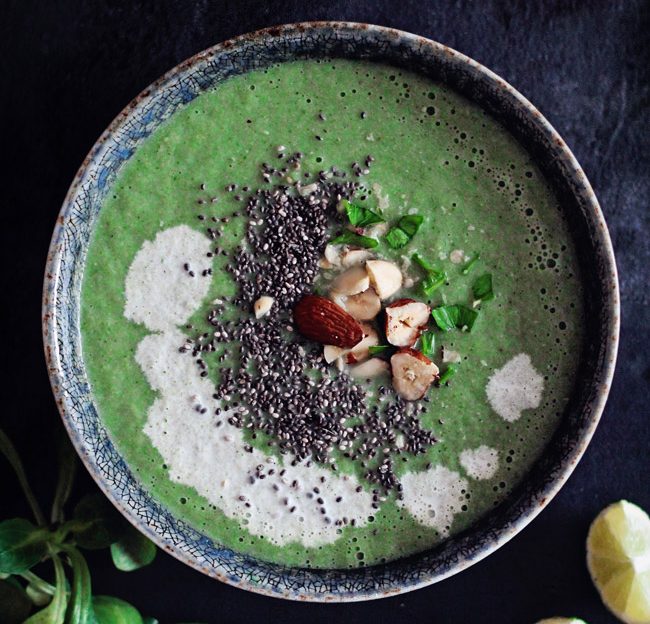 Especially for the master metaboliser, our liver. This exceptionally hard working organ filters our entire blood volume every three minutes. The liver is that special metabolic organs that processes and neutralizes all the chemicals in our body, especially the ones we are exposed to, from our food, environment, or personal care products. In healthy diets or detox diets, when we consume appreciable quantities of vegetables and fruits, our cells receive high concentrations of potassium which flushes out excess water and toxins, creating an alkaline environment.

Broccoli the main ingredient in this nourishing soup, cools and soothes the liver and helps to prevent food stagnation and internal stress.

Broccoli is known for its ability to clear heat and regulate water circulation. It also helps to regulate qi circulation.

The philosophy of Chinese Medicine informs us that it enters the Stomach, Spleen, Urine Bladder, and Liver.

Add the filtered water or vegetable broth, bring to a boil, then cover the pot with a lid and let simmer for 5-7 minutes, until the vegetables are tender but not mushy.

Stir in the greens, then transfer into the blender, add the chia seeds and lemon, and process to obtain a smooth cream.

Hoping that you enjoy this exceptionally healthy dish.

Please share! Help the word get out. Pin the graphic too.
Categories: Detox, Digestion, Inflammation, Liver